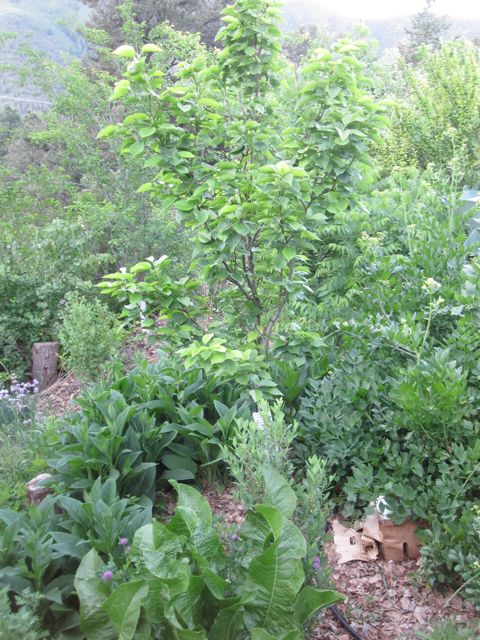 Central Rocky Mountain Permaculture Institute is operated by Jerome Osentowski at 7200' elevation in Basalt Colorado, in a pinyon-juniper forest with very dry soils, steep slopes, and poor fertility. Over decades, Jerome has developed a productive forest garden. Repeated sheet mulching, combined with terracing and extensive use of chop-and-drop nitrogen fixers and other mulch plants has created a remarkable soil which stores the infrequent rainfall and limited irrigation. 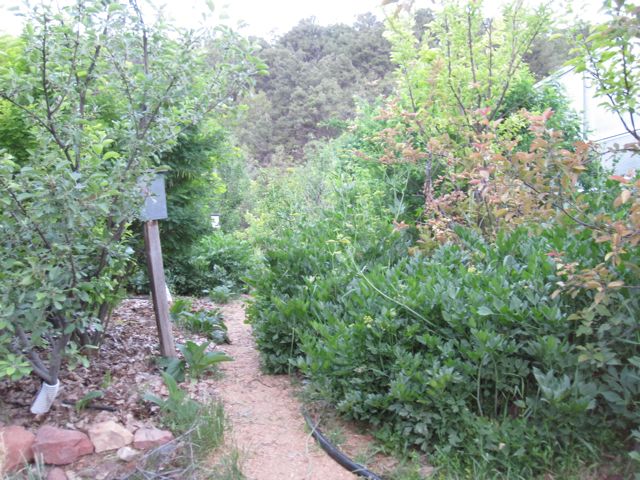 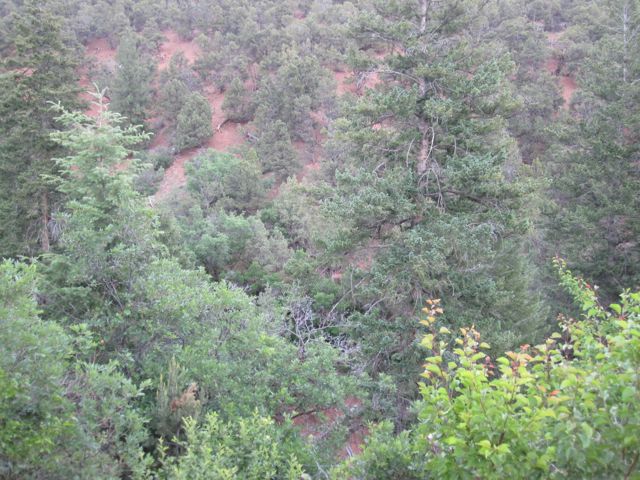 I was one of Jerome's interns in 1992 when the forest garden was just going in. Now it is one of the most established examples in the country and a model we have much to learn from.

In the dry rockies pome and stone fruits are more disease-resistant than they are in the east of the U.S. (though late frost can destroy flowers and developing fruits). Jerome's canopy is primarily made up of apple, pear, apricot, and plum trees. Pears and plums are the best producers. Additional fruit trees include hawthorn, "Ivan's Belle" chokeberry x mountain ash, and mulberry. 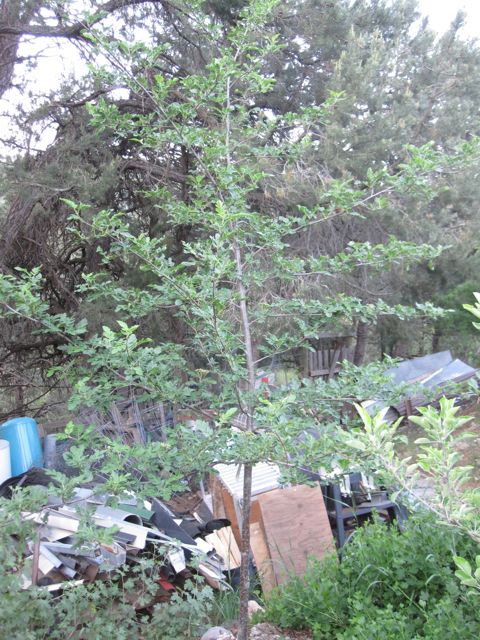 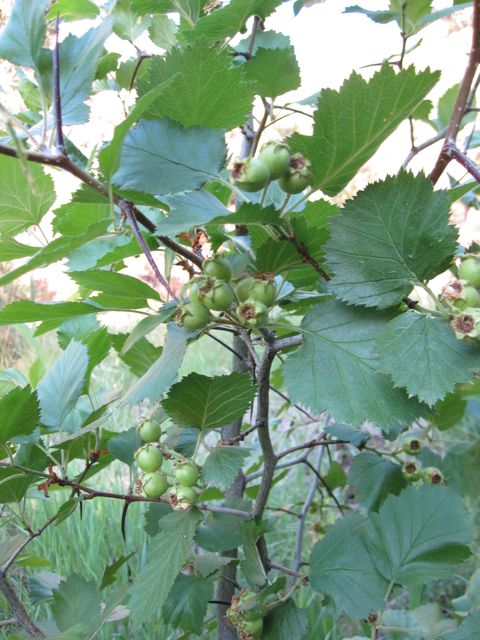 Siberian pea shrubs are a major component of the canopy - perhaps up to a third of all cultivated trees and shrubs. Some pea shrubs beans are collected for use as a dry bean. They are pruned heavily every year, with the prunings used as mulch around productive trees and shrubs. Additional nitrogen fixing trees and shrubs include russian olive and several natives including New Mexico locust, buffalo berry, and two species of mountain mahogany. 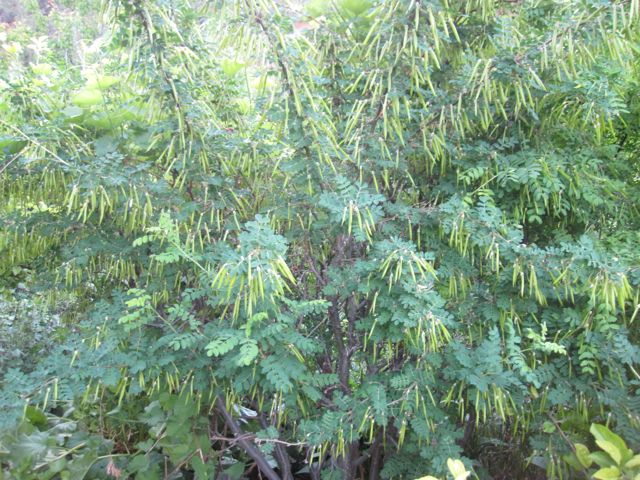 Pea shrub stems in the understory, I imagine these were coppiced previously: 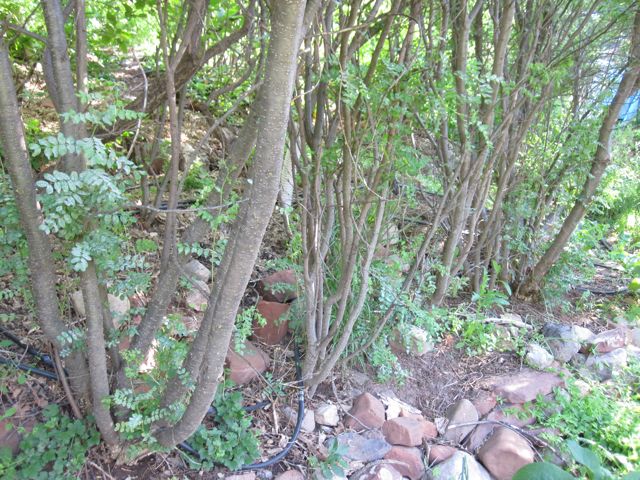 Mountain mahogany (Cercocarpus spp., right), one of many native nitrogen fixers utilized in the garden: 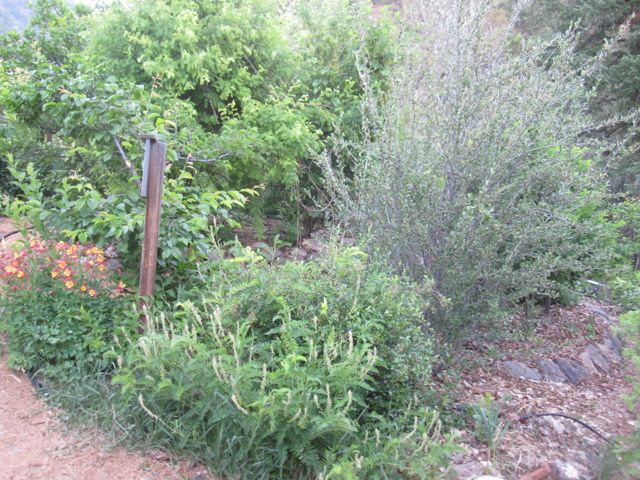 Vines include grapes (which fruit very well and are trained along the rock walls of terraces), hops, and some annuals including various species of beans.

The primary productive shrubs are Nanking cherries and cultivated gooseberries and currants. Trial and error over decades has determined these species (along with plum, pear, grape, and pea shrub) to be the best suited to Jerome's site. The currants and gooseberries are tolerating substantial shade. Interestingly jostaberries do not bear well.

Gooseberries this old and well-established make a dense groundcover: 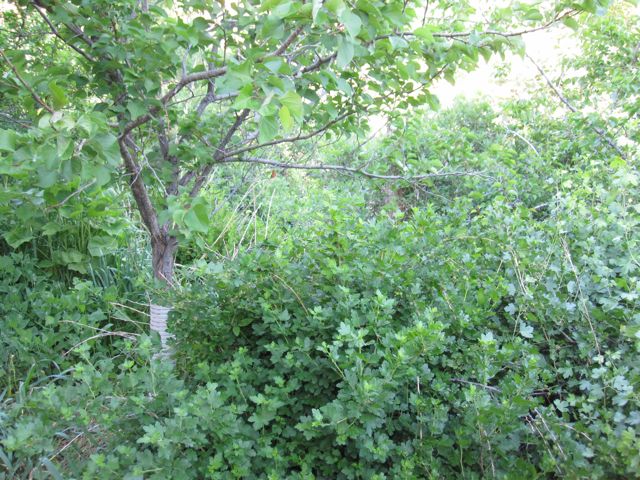 Western native golden currant (Ribes aureum) which is volunteering all over Jerome's garden. He reports that the birds love the fruit and he eats a fair amount of it as well. 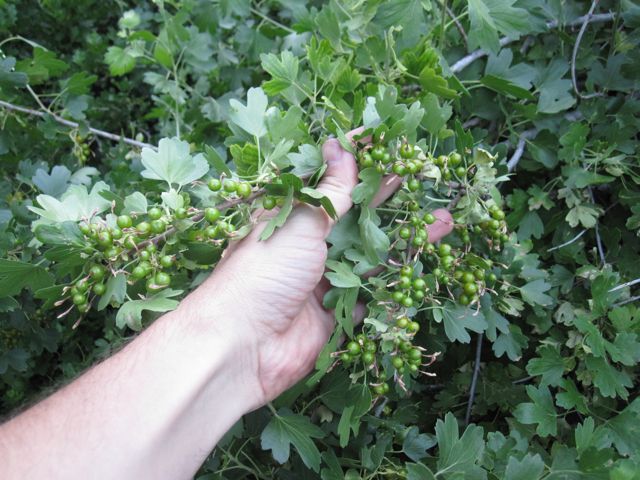 Perennials in the herbaceous layer are primarily chop and drop mulch plants and include extensive tracts of lovage and comfrey. Additional herbs include horseradish, Astragalus mongholicus, mint, and Spanish Rojo garlic which has perennialized. 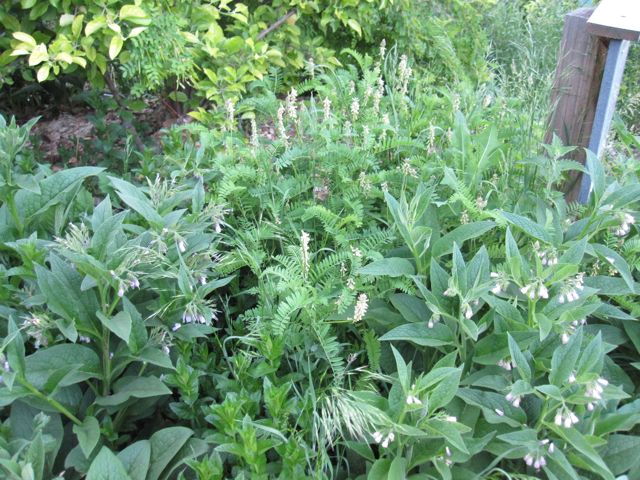 Annuals make up a sizeable component of the understory as well. Jerome grows salad greens and brassicas until the shade becomes too great. Self-seeding annuals also make up a fair amount of the understory. These include orach (Atriplex spp.), common lambs quarters (Chenopodium spp.), and a truly remarkable giant lambs quarters (Chenopodium spp.) with tremendous flavor and a savoyed, succulent texture. This strain was selected by Jerome in an alley in Alberta and has come true to seed for over 15 years in his garden. Here's a photo: 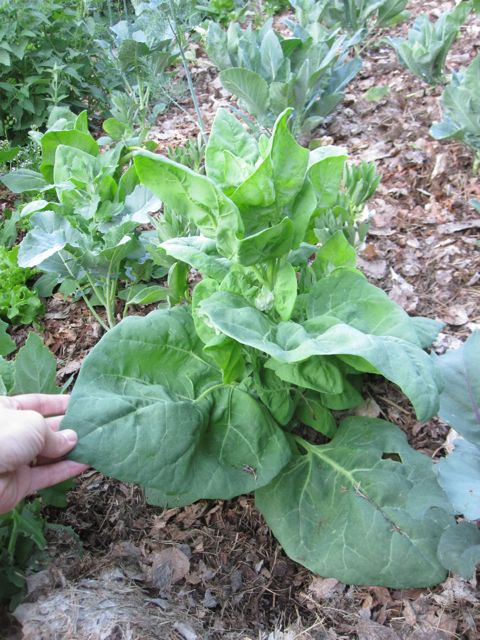 Jerome has also left some areas of the original vegetation, or permitted certain species to grow. These islands of biological diversity are important reservoirs of organisms for pest control, and Jerome considers them a place of calm and beauty withint the garden. These areas are substantial, and included large patches of Gambel oak (Quercus gambellii), pinyon pine (Pinus edulis), chokecherry, and juniper. Jerome harvests and makes stewed fruit from the productive chokecherries on site. 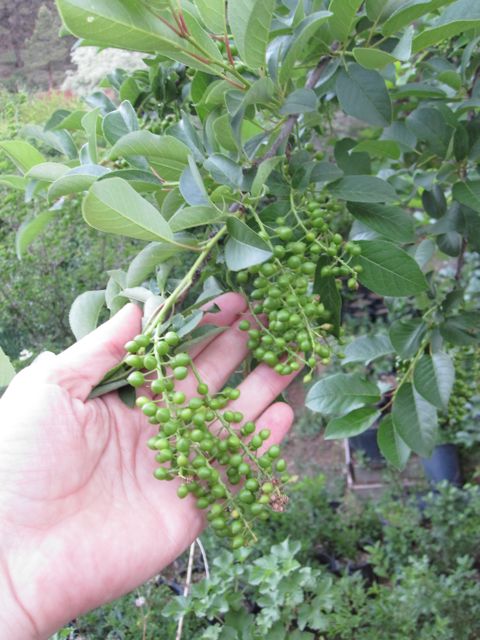 Coppiced pea shrub used for chop and drop on hawthorn and gooseberry: 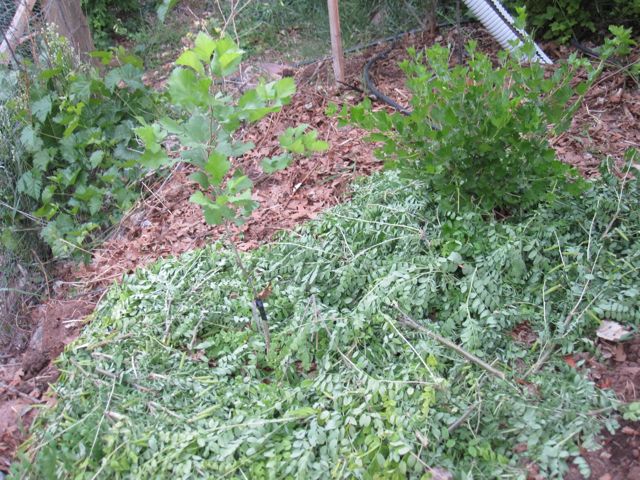 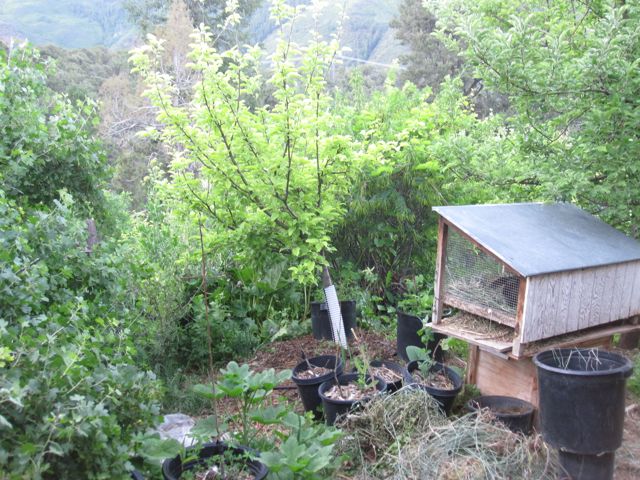 Terraces are an important component of building soil and harvesting rainfall on this sloping site: 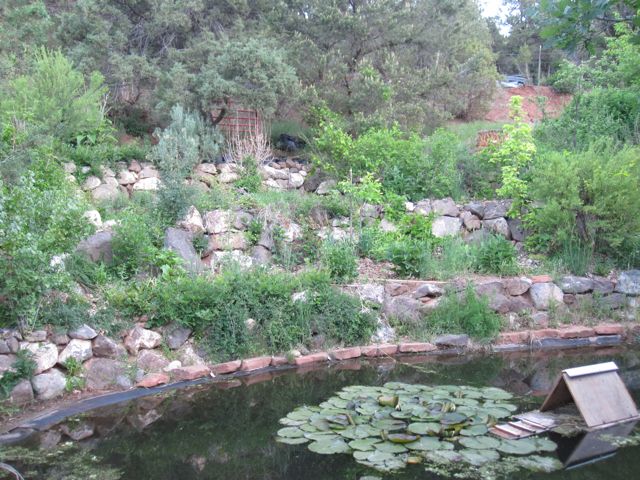 The pond is also home to an "outdoor room": a bench with an arbor that hops is bring trained on: 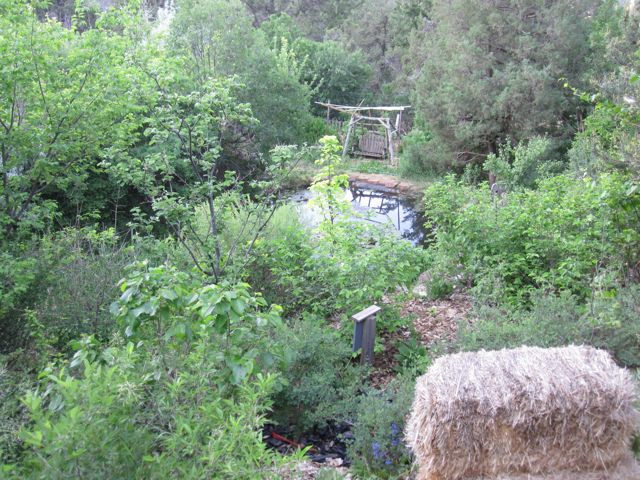 It is worth mentioning that Jerome also has a world-class greenhouse with an indoor, 4-season forest garden featuring papayas, bananas, and all kinds of fantastic stuff. 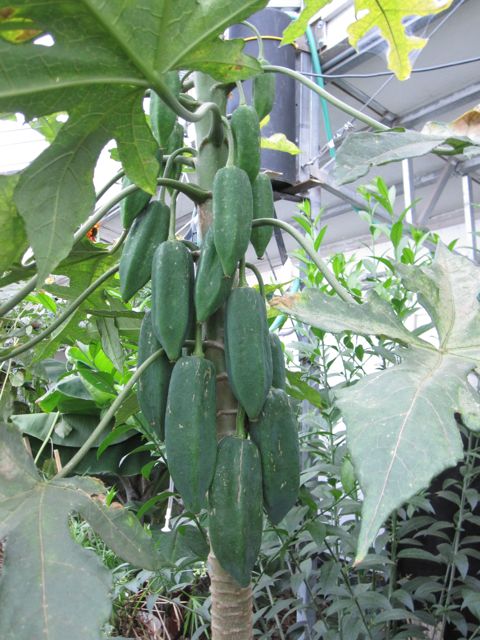 See the crmpi south side and crmpi east side polycultures for more photos.