Hog peanut is a great example of an underutilized native species ripe for inclusion in edible forest gardens. It is one of the few nitrogen fixers for shade - commonly found in dense mats in dry open woods in New England. As a groundcover it is very dense and will smother anything under 3' tall by late summer. Thus companions should be at least 4' high (any nice size established shrubs or trees jostaberry size or higher). Spring ephemerals like ramps also make good companions as hog peanuts are a bit late to get started as they grow from seed each year. In our garden hog peanut smothers the following: sea kale, skirret, gooseberry, running juneberry, and many more.

To me this is not a major food plant, but a great native nitrogen fixing groundcover with a minor food bonus. After pollination the flowers bury themselves and form beans underground. In our garden they are always between the mulch and the soil. They are hard to find at first because they are brown, but you can get a handful in ten minutes in a dense patch. Kind of a minor food as a result of this slow harvest, and not real heavy producers, but fun to harvest and good to eat. They also sometimes set seed on above-ground pods like normal legumes, but these seeds are much smaller than the underground ones. References indicate that they are edible though I have not tried. 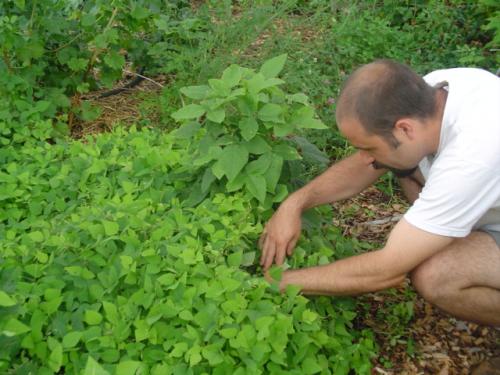 Jonathan Bates with a dense mat of hog peanut in our garden in early summer. It just gets denser and higher as the season goes on! 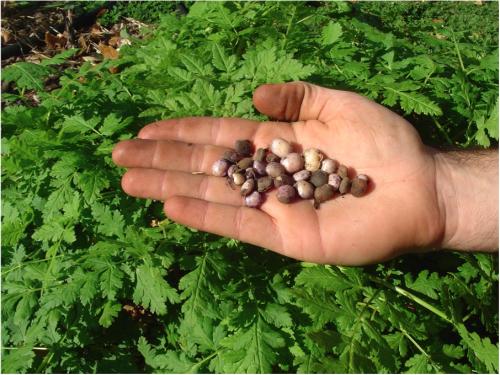 The high-protien and tasty underground beans of hog peanut. Some have fuzzy brown skin removed to show pretty colors beneath.